This experiential workshop explores how the potent power of the ten great wisdom goddesses can be experienced through yoga. Meet the great wisdom goddesses and celebrate every stage of women’s lives, from menarche, with the luscious Sodasi, the sixteen year old goddess, through to the crowning wisdom of Dhumavati, the grandmother goddess. Learn how the Dasa Mahavidyas can support the experience of the female siddhis: initiatory experiences granting insight, wisdom, and empowerment.

The intention is to provide practical experience of breath (pranayama), rhythmic and restorative yoga postures (asana), gestures (mudra), heart-based meditations (yoga nidra) and deep, joyful heart songs (kirtan) that celebrate every part of being woman. The program is open to responsive, intuitive attunements and adjustments to meet the specific needs of those attending.

It is open to all women and to yoga teachers/ yoga therapists/ health care practitioners/midwives/doulas who are interested in attending, either for themselves personally or for their students and clients. 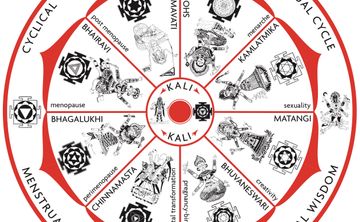