Registrations are closed after October 15, 2020

Registrations are closed after October 15, 2020

On arrival at New Delhi International Airport, you will be greeted by our company guide and transferred to the hotel, meeting with the other group members. Then we will have dinner at the hotel and stay overnight in Delhi.

Breakfast at the hotel then begins with a sightseeing tour of New Delhi and Old Delhi. We will visit the walled city of Old Delhi, where every street is buzzing with activity. The influence of the Mughals, who once ruled from the ramparts of the Red Fort, can be seen extensively.

First, we will visit Jama Masjid – the largest mosque in India, built in the 17th century. Later, we will drive past the New Delhi Area to visit Raj Ghat, India Gate, Rashtrapati Bhawan (Presidential Palace), the Parliament House, and other colonial buildings.

The early 20th-century work of Edwin Lutyens, a British architect, prominently features in the colonial districts.

In the evening we will return to the hotel for dinner and a restful night's sleep.

After breakfast, we take our transfer to the airport and board the flight to Varanasi.

Arrive and transfer to the hotel and in the evening to explore Varanasi with our local tour guide including attending the majestic Arti on the banks of the Ganges.

After the Aarti ceremony, we will head back to the hotel for a delicious dinner and free time to rest and relax for the next day.

Early morning we will head to the banks of the Ganga to savor a magnificent view of the sunrise. You will get back to the hotel for breakfast, after which we will head to Sarnath with our local tour guide.

Sarnath is where legendary emperor Ashoka spent the good times of his life and built Dharmarajika Stupa, as well as erecting his symbolic pillars.

After the sightseeing tour, we will drive back to the hotel to rest and refresh before going to watch an Indian classical dance performance.

Overnight stay at the Hotel in Varanasi where we will have breakfast and dinner.

Early morning transfer to the airport to board our flight to Delhi then continuing on the 5-hour drive to Agra via Vrindavan.

The Vrindavan is a holy town in Uttar Pradesh. The Hindu deity Krishna is said to have spent his childhood here. It’s home to temples, many of which are dedicated to Krishna and his lover, the deity Radha.

At Banke Bihari Temple, the curtain in front of Krishna’s statue is opened and closed every few minutes. At Radha Raman Temple, a gold plate beside Krishna signifies Radha. Prem Mandir is a huge white marble temple. Once we arrive in Agra we will take our transfer to the hotel for our overnight stay in Delhi where we will take breakfast and dinner.

Breakfast at the hotel after you will experience the beauty of the Taj Mahal “the symbol of love” and UNESCO World Heritage Site, the Taj Mahal was built by Mughal emperor Shah Jahan for his beloved wife, Mumtaz Mahal.

We will also visit the Agra Fort, Itmad – Ud – Daulah (Baby Taj). After the red fort, we will check out of the hotel and have a 6-hour drive to Jaipur via Fatehpur Sikri.

Fatehpur Sikri is a small city in northern India and was founded by a 16th-century Mughal emperor. Red sandstone buildings cluster at its center. Buland Darwaza gate is the entrance to the Jama Masjid mosque.

Nearby is the marble tomb of Salim Chishti. Diwan-E-Khas hall has a carved central pillar. The Jodha Bais Palace is a mix of Hindu and Mughal styles, next to the 5-story Panch Mahal that overlooks the site.

After sightseeing, we will drive past the Hawa Mahal and through the pink rose residential and business areas. In the evening, we will check into our hotel.

Overnight stay at the Hotel in Jaipur where we will have our breakfast and dinner.

We then proceed to the City Palace, a perfect blend of Rajasthani and Mughal architecture.

Next, we visit Jantar Mantar, an observatory built in the 18th century. Its solar devices can measure the day’s progression with an error of just 2 seconds, making it an astronomical treasure that can still accurately make predictions today.

Next, we will also visit Hawa Mahal (Palace of Winds), a five-storied facade made of pink sandstone.

Built in the year 1799, the Hawa Mahal and its discreet windows (Jharokhas) allowed royal ladies to watch street processions and festivities. After sightseeing, we drive back to the hotel or visit the market for shopping.

Optional evening excursion to Chokhi Dhani Complex: an ethnic village resort located at a distance of 15 km from Jaipur. A typical Rajasthani village atmosphere is recreated on the sprawling ground and includes entertainment by folk dancers and musicians. You can move around freely and enjoy the evening.

Overnight stay at the hotel in Jaipur (Meals: breakfast at hotel + theme dinner in Chokhi Dhani).

In the morning after breakfast, we will visit the local market with our local guide and explore the city. Then there will be a 6-hour drive to New Delhi. Upon arrival in New Delhi, we will check into our hotel for dinner and a good night's sleep.

It is on the banks of the River Ganges. The River Ganges leaves the mountains and enters the plains with Haridwar being the first major town on the plains. Though the Ganges does not lose its rapids completely nevertheless it becomes very quiet and calm here.

The city acquires a unique charm in the evening when the ghats become breathtakingly beautiful with thousands of diyas and marigold floating in the waters of Ganges.

After sightseeing of Haridwar, we will drive to Rishikesh, arrive and check in to the hotel where you will have breakfast and dinner.

After breakfast at around 10 Am, we will begin exploring Rishikesh, also known as the world capital of yoga.

We will also visit Swarg Ashram, Geeta Bhawan, the Beatles Ashram - home of Transcendental Meditation, then Parmarth Niketan Ashram, a true spiritual haven lying on the holy banks of Mother Ganga and the largest ashram in Rishikesh, and the sacred Bharat Mandir a famous temple situated in old Rishikesh.

According to legends, Rishikesh came into existence with this temple only in about 789AD. After being at the temple, we will complete the day viewing the sunset while participating in an Aarti ceremony on the banks of Ganga River.

We will set off at 4 am to drive an hour to the Kunjapuri temple situated perfectly atop a conical mountain. It is a historically acclaimed Hindu sanctuary that was built in memory of the Goddess Parvati (also known as Goddess Sati and Goddess Durga).

However, a note written about its history was that religious followers in India built the Kunjapuri shrine after the grueling death of their Goddess Parvati also known as Sati.

Sati sacrificed her life after her father King Daksha humiliated her husband and her at a gathering that attracted thousands. After her sudden death, her husband Lord Shiva flew her body over Rishikesh and her destroyed body fell into the lands of Rishikesh thus creating a temple dedicated to her name.

According to temple goers in the area, the temple atop the hill on a clear day can attract some spectacular views of the ever so beautiful snow ranges of the Himalayas and the valleys of the Bhagirathi.

After breakfast, we will transfer to the Vashistha Cave, where one of the most revered saints of Hindus, Sri Vashistha and his wife Srimati Arundhati had meditated for a long time.

Located on the banks of the river Ganges, the cave is an ideal gateway for any spiritual seeker who would like to meditate and spend time in contemplation.

After breakfast, we will transfer to Shivpuri. The name Shivpuri means “abode of the Mahadeva”. Shivpuri is one of the known rafting spots.

Rafting from Shivpuri to Rishikesh covers a distance of nearly 16 km. You can choose this course if you are a fun-loving person that likes adventure and thrill. After this 16 km route, we will arrive and transfer to the hotel for lunch, refresh and evening free time.

Today there are no activities.

After breakfast, we take the 230 km drive to New Delhi, arrive and transfer to the airport/hotel/railway station where our yoga tour retreat ends.

Our yoga tour packages in north India are well-planned, covering the most exotic and important destinations.

From Delhi, the heart of India, Varanasi, one of the oldest living cities in the world, to Agra, home to the iconic Taj Mahal, as well as a mausoleum built for the Mughal ruler Shah Jahan’s wife, Mumtaz Mahal.

A trip to northern India would not be complete without a visit to Jaipur, the pink city, in the Land of the Kings - an epitome of India's splendor and greatness dating back several centuries.

Of course, you couldn't go on a yoga tour in India without traveling to Rishikesh in Uttarakhand.

Located in the foothills of the Himalayas in northern India, it is known as the 'Gateway to the Garhwal Himalayas' and 'Yoga Capital of the World'.

Yoga is the journey of the self, through the self, to the self.” –The Bhagavad Gita

• Driver & Guides Tips / Gratuities.
• Any major meals (Lunch/Dinner) in the Tour. (Except one Dinner in Agra at the hotel and one dinner in Jaipur at Chokhi Dhani)
• Any services not specified above.
• No Guide services in Fatehpur Sikri.
• International /Visa fees.
• International Flights.
• No Transport during the day at leisure.
• Any Travel/Medical Insurance.
• The expense of personal nature like tipping, laundry, and telephone/fax calls, alcoholic/non-alcoholic beverages, camera/video camera fee at monuments, medical expenses, porterage and airport departure tax, etc.

North India yoga tour locations including Delhi, Varanasi, Agra, the Taj Mahal, Jaipur, Haridwar and Rishikesh, the yoga capital of the world and gateway to the Himalayas!

We will guide you through the amazing sites, sounds, and traditions of India while also empowering you to feel safe and comfortable during the tour.

All accommodation will be a twin sharing basis for each and every hotel, and Private rooms available on extra cost.

12 breakfasts and 12 dinners are vegetarian at the hotel and will all be vegetarian/ vegan-friendly.

On arrival at New Delhi International Airport, you will be greeted by our company guide and transferred to the hotel 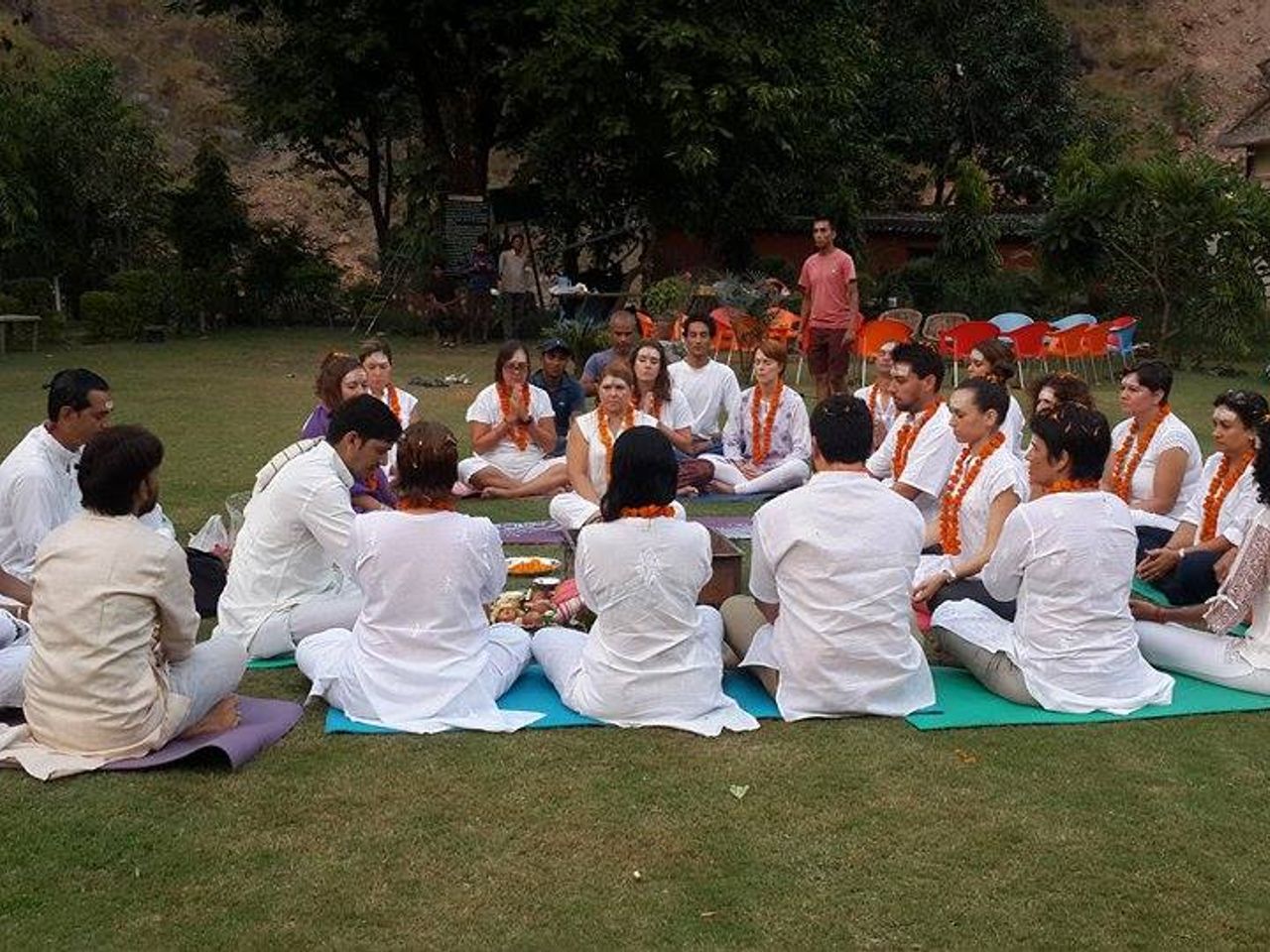 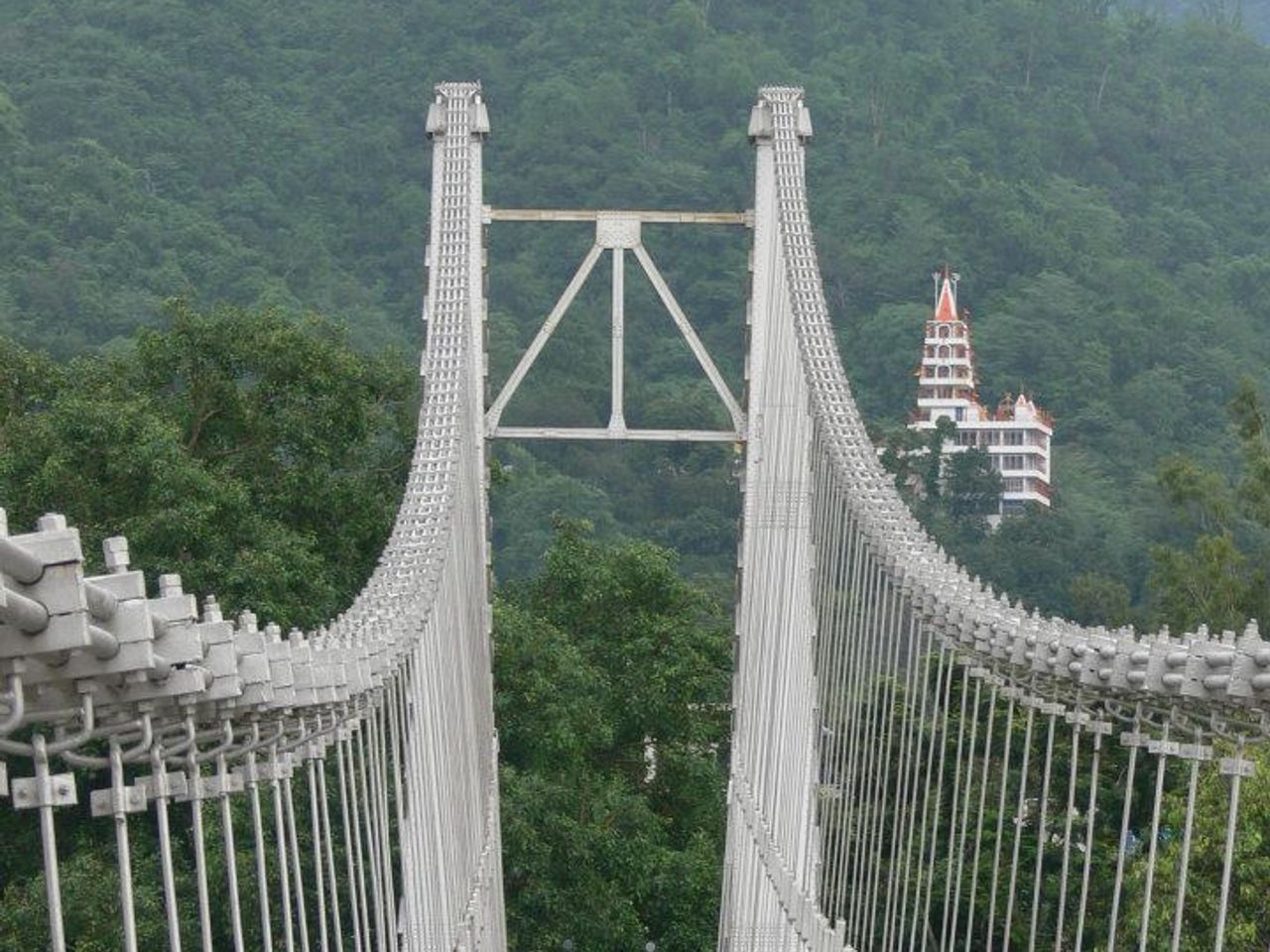 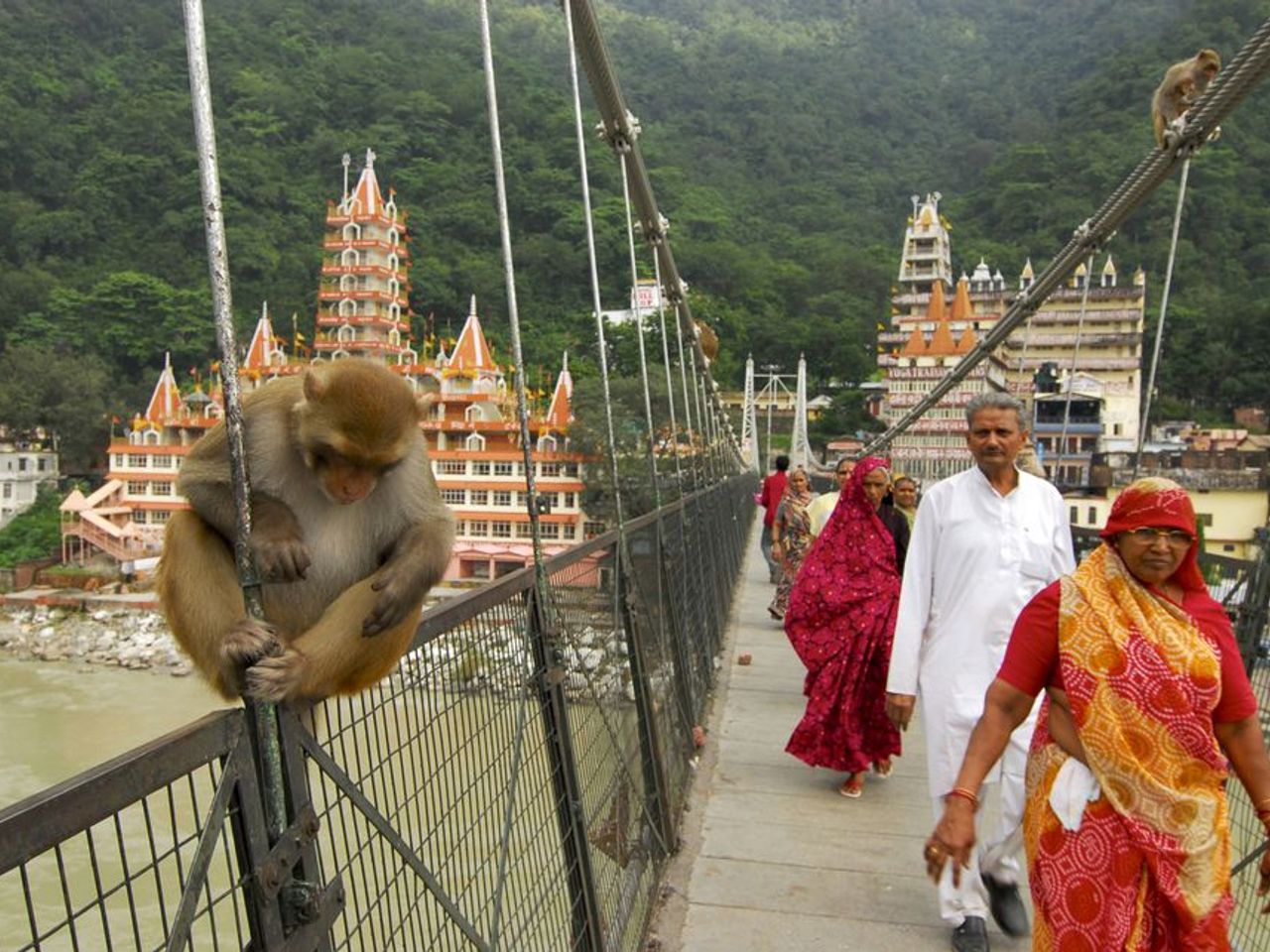 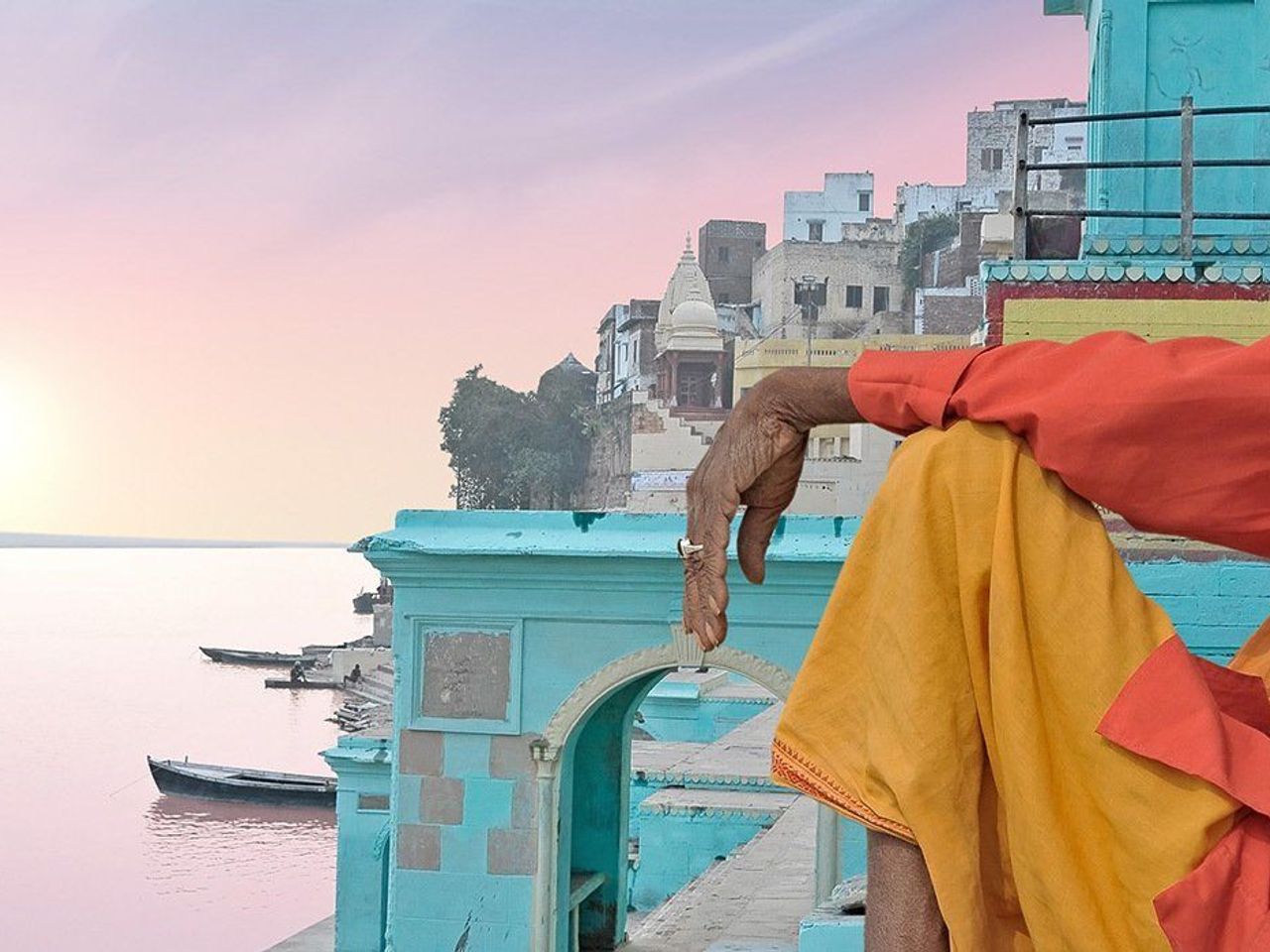