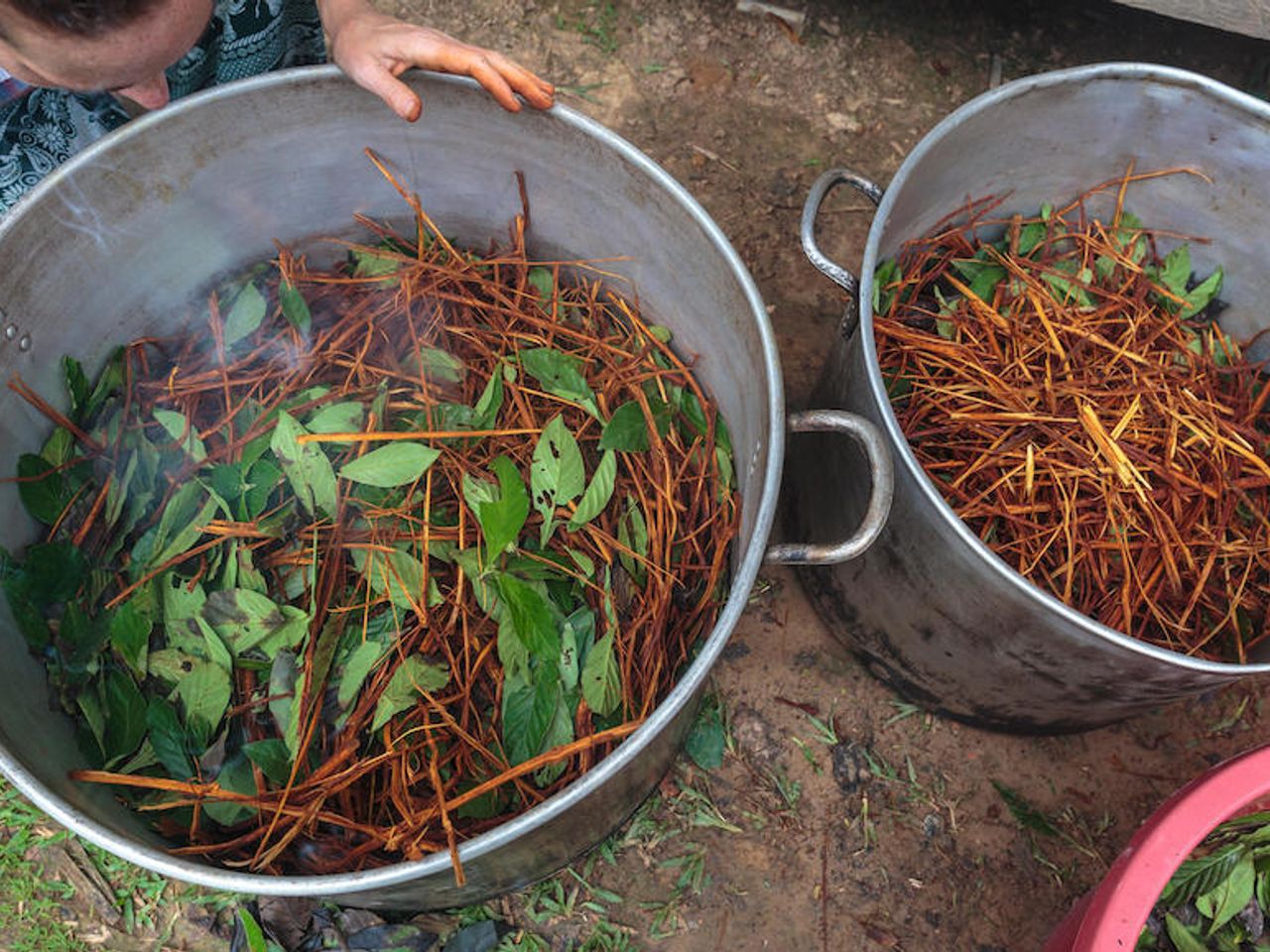 Is Ayahuasca illegal? It’s not quite that simple

As you begin your search for the perfect place to embark on your first Ayahuasca journey, you find yourself wondering: Is Ayahuasca illegal?

That’s a logical question coming from the Western context where psychotropic substances are definitely not legal. One would think that Ayahuasca would be slapped with the “illegal” sticker too; and in a roundabout way, it has been, which makes it much more difficult to search out reputable facilitators and shamans without traveling to Central and South America. Understandably, many seekers called to an Ayahuasca experience may be wary about stepping into ceremony.

What’s the deal with the legality of Ayahuasca?

The main chemical component of Ayahuasca is dimethyltryptamine, more commonly known as DMT, which is classified as a Schedule 1 drug. Its structure is very similar to that of LSD or psilocybin, both of which were outlawed after a rise in recreational use in the 1960s and ’70s. Most substances that produce hallucinogenic effects came under regulatory scrutiny around this time. However, the plants that contain DMT, and the MAO inhibitors that prevent the stomach from digesting it too quickly, were not outlawed by the 1971 Vienna Convention.

This is where it gets tricky.

Ayahuasca legality in the USA and Canada

Simply stated, it’s not illegal to possess plants that contain the medicine, including psilocybin, peyote, san pedro, and the active ingredients of Ayahuasca (also known as yage), Banisteriopsis caapi and Psychotria viridis.

But the psychoactive components within them are.

B. Caapi contains MAO-inhibiting alkaloids, which serve to block the brain’s natural guardians that would otherwise prevent the psychoactive effect of Mother Ayahuasca from taking hold. P. Viridis, like quite a few other plants in the world, is rich in DMT, a substance also produced every day in our brains. But because we spend our days flooded with MAO, we don’t feel it.

Practically, this means that within the United States, Canada, the UK, and other countries governed by the 1971 Vienna Convention, you aren’t breaking any laws until you cook the Ayahuasca plants into a brew and consume the DMT they contain. The lengthy preparation of the concoction typically involves brewing the rope-like fibers of b. Caapi and the leaves of p. Viridis. Some countries have prosecuted individuals in possession of the plants too, which results from the often vague and varied interpretations of the laws around DMT and plant medicine.

In the United States, it doesn’t take a huge research effort to find nightly Ayahuasca ceremonies in New York, San Francisco, and Los Angeles. Elsewhere in the US, regular ceremonies can be found in every major city. The recent decriminalization of entheogens, including Ayahuasca and psysosibin, in Denver and Oakland for a start, coupled with the proliferation of research by respected universities, including Johns Hopkins, around the use of psychedelics as an effective treatment for chronic depression, PTSD, addictions, and other difficult to treat health problems, suggests that the legal landscape could potentially change in the not so distant future.

In the meantime, for those who prefer to follow the rules to the letter, there is only one way around the current legal restrictions in North America: join a church.

The Santo Daime and the Uniao do Vegetal, or UDV, have secured permission under religious freedom protection to work with Ayahuasca in their churches. With established congregations in the United States and Canada, the UDV is certainly not a place for the merely curious, as they take a solemn approach to their plant medicine work. They are keepers of Ayahuasca ceremonies and are working diligently to ensure that the Sacred Vine holds a respected position in North American culture.

In spite of religious freedom laws, in some European countries, members of Ayahuasca-centered churches have been arrested for possession of DMT. While individuals rarely end up in court (and none convicted that we know of), the very threat of prosecution is cause for concern for those working with Ayahuasca, even in the context of religious ceremonies.

For example, although the 2019 World Ayahuasca Conference took place in Spain and there is no statute specifically outlawing Ayahuasca in that country, the legal landscape is murky at best, and there have been reports of occasional police raids on ceremonies in Spain and throughout Europe. The Netherlands, once a more permissive “grey area” country, recently passed a law officially outlawing the plants used to make Ayahuasca, which could impact the Santo Daime church.

So is Ayahuasca dangerous?

A ceremony participant receives a cup of Ayahuasca, the traditional Amazonian plant medicine used for visionary healing, in a Shipibo maloka in Peru.

In most cases, healers and shamans trust that the benefits of working with Ayahuasca far outweigh the unpleasant physical effects it often brings. Still, the medicine does have a tendency to increase the participant’s heart rate and can be contraindicated for those with unchecked high blood pressure or cardiac issues. There are few, if any, records of Ayahuasca or any other psychoactive substance causing fatality on its own, but that hasn't yet impacted decisions by U.S. Supreme Court and other governing bodies to outlaw its use.

Because the Ayahuasca tea promotes a psychedelic experience (DMT, is considered a hallucinogenic drug), it can also be contraindicated for those under treatment for schizophrenia or other mental health disorders. It has proven difficult for researchers to demonstrate whether Ayahuasca's benefits or side effects are permanent since so much of the healing is dependent on the "set and setting" within a traditional ceremony, but all agree that the effects of Ayahuasca can be risky when complicated by preexisting conditions.

Unsurprisingly, Ayahuasca is absolutely legal in Latin American countries where the chacruna vine grows naturally and where historic usage among indigenous peoples is inherent in the traditional lineage of shamanism. These countries are:  Brazil and Ecuador (where a church operates around use of the medicine), and Peru and Colombia where indigenous peoples have worked with Ayahuasca for at least a thousand years, possibly longer. The medicine has a well-established history of shamanic, religious, and curative use in ceremony. In fact, those who serve medicine in Peruvian circles are often referred to as curanderos (healers).

Costa Rica also doesn’t consider Ayahuasca illegal. And while neither is it specifically identified as legal, the heightening interest in plant medicine ceremonial experience in recent years among Europeans and North Americans has stimulated international tourism wherever it’s served, creating a niche market for Ayahuasca retreats. As a result, Costa Rica has become a hub for retreats and ceremonies for visitors from around the world.

In other Central and South American countries, Ayahuasca enjoys a “grey area” legality status and there are reputable retreat centers that are far from hidden, offering public ceremony and healing work. Since the legality is non-specific in these countries there is some risk, but more for those in possession of and serving the plant medicine than those partaking.

Ayahuasca enjoys varying levels of legality in Europe, especially in Italy, the Netherlands, Portugal, and Spain, as well as in the Ukraine. In Romania, the medicine enjoys a limited legal status for research. As mentioned earlier, much of Europe affords protection to Ayahuasca healings when used in ceremonial religious contexts, such as the Native American Church and the UDV, but even these protections have come into question in recent years.

Even so, the potency of Ayahuasca healings and the demand for the work keeps seekers and curanderos quietly holding ceremonies and retreats across the continent. A quick search online will find you listings for ayahuasca experiences and retreats in many European countries including Great Britain, despite the fairly stringent legal standing there. You can also find curanderos who travel through and to multiple countries, often stopping in Spain where policies are the most friendly towards the vine.

Growing the Ayahuasca vine in Australia isn’t illegal, however, DMT is considered a Schedule 9 (prohibited) substance.  However, there have been no known prosecutions for possession or use of the medicine, and ceremonies are advertised quite openly in Australia. In Bali and Thailand, medicine ceremonies are also held overtly. Although the exact legal status is unclear, no information is readily available suggesting any prosecutions for possession or use of plant medicine in these countries.

Determine your comfort with legal risk or travel abroad

Unfortunately, the legal grey area may mean that those seeking to work with Ayahuasca must consider their comfort level with risk or, alternatively, travel to one of the countries where Mother Ayahuasca has clear legal status. If you make the choice to work with a shaman or facilitator in a country where DMT-containing plants are clearly prohibited, discretion is required around sharing information about the participants, facilitators, and the center where the ceremonies are held in order to protect all involved.

Above all, remember that the use of Ayahuasca and other plant medicines is a sacred rite that should be approached with respect for the traditions carried by those who serve it. The rapid acceleration in plant medicine tourism has come coupled with a great deal of misinformation and there are alarmingly increasing numbers of people offering Ayahuasca products and ceremonies, including on line. Be sure to do your research to find well-established, reputable facilitators or shamans or vetted retreat centers. If you feel uncertain – beyond a natural apprehension about the unknown – or if the communication with your potential facilitator strikes you as inauthentic or unsafe, find a different opportunity. There are plenty of ayahuasqueros whose motivation is pure. The medicine takes care of those who seek her wisdom from the heart.

If you’d like to learn more about the legality of working with plant medicine in nations governed by the 1971 Vienna Convention, you can read the U.N. report here.