Why go on retreat?

Lama Tsultrim Allione is very dedicated to the importance of the retreat, and we sat down with her over Skype to learn more about its importance. “I do really emphasize retreat, whether it’s a group retreat or solitary retreat, but I’ll speak to solitary retreat because I think that’s something that’s not done so much, and it is such a powerful experience.”

At first removing ourselves from our social network and the internet is a difficult concept. As a species, humanity is dependent on human interaction. “To torture people, they put them in solitary confinement, so why do it? Well, because so much of our needs and desires are based on connection with other human beings, even negative connection is better than nothing.” The practice of retreat has been part of the Buddhist tradition from the very beginning, and, Lama Tsultrim says, it certainly was always very prominent in the Tibetan tradition.

This makes it seem more harmful than beneficial, so why go on retreat? Lama Tsultrim understood the difficulty of this question. “The question is why, why would you do that? Well, the quiet that you can find in retreat is something really unique, and then you can really see how much noise you’re making [laughter]. Actually the problem is not out there – it’s inside. But in retreat our practice and our confrontation with ourselves is so intense.”

“The other thing that happens in retreat,” she says, “is anything that you haven’t looked at comes up. You don’t have any distractions, so it’s like placing yourself in a very pure container in which your own mind becomes very clear.” Whether it’s positive or difficult, you “see where you are,” she says. In terms of practice, because of the isolation and the quiet, “you’re able to go much deeper in your practice than you would, say, in a group situation or your one hour of meditation in the morning before you run off to work.” Retreat becomes truly helpful because it allows us to remove ourselves from these distractions, distractions that have practically become addictions, and truly understand who we are, without the bustle of a routine day.

“You can sit for hours, nobody’s going to stop you, and when you get up, there’s nobody there to distract you. So creating the continuity between meditation and post-meditation experience is much easier in retreat.”

It really comes down to learning – learning about ourselves, and creating the conditions to do so. “Whenever you’re trying to do anything, whenever you’re trying to learn something, you put yourself in the most ideal situation possible to learn that. If you’re learning to ride a bicycle,” Lama Tsultrim says, “you go onto a flat, very wide road, where you’re not going to fall off the edge, and then you try to learn. Then after a while you can take it up mountains or into more difficult situations. Retreat is an ideal situation, and one in which you can go much deeper than in ordinary life.”

Just hearing of Lama Tsultrim’s own retreat experiences was inspiring, providing understanding of the healing situation the retreat provides. “I did a year-long solitary retreat in 2001-2002, and I was very exhausted when I went in. I was sick with chronic lung issues, and because I wasn’t talking, I was able to rest deeply in retreat because I didn’t have other things demanding my attention. My body healed and my energy was able to restore itself in a way that really I can’t think of any other way it could have happened.”

This understanding of the need for retreat was the root of the founding of the Shambhala Mountain Center in Colorado. “When I was a nun in the early 1970s and living in the Himalayas, all the lamas that I knew had done lengthy retreats, and so when I came back to America in late 1972, and I met Trungpa Rinpoche again, I told him I had this idea to make a retreat center in America where people could go to the depths of meditation that they had in Tibet. We actually joined forces to do that, and did fundraising with Allen Ginsberg and Ram Dass tours, which was then used to pay for the what’s now the Shambhala Mountain Center, what used to be Rocky Mountain Dharma Center.”

So go, go on retreat. See what it’s like for yourself. Lama Tsultrim’s center in southwest Colorado, Tara Mandala, has many beautiful cabins with vast views and profound silence. 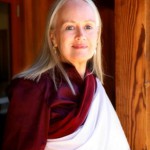 Lama Tsultrim Allione first traveled to India and Nepal in 1967, met Chogyam Trungpa Rinpoche in 1969 at Samye Ling and in 1970 she became one of the first American women to be ordained as a Tibetan nun. She was given her vows by the Karmapa, from the Karma Kagyu school of Tibetan Buddhism, who gave her the name Karma Tsultrim Chodron.  In 1993, with her husband, David Petit, Tsultrim Allione founded Tara Mandala, a retreat center in southern Colorado. Allione regularly teaches in the United States and in Europe.

Find more information about Lama Tsultrim Allione on her profile or her website.