Ekabhumi Charles Ellik is an award-winning poet, author, devotional artist, yoga instructor, emcee, and event producer. His primary spiritual practice is creating sacred art. Through a ritualized and meditative creative method, he makes artworks for ceremonial and educational use that help people recognize the divinity of common experiences and find meaning in daily life. His artworks may be found in yoga studios, private homes, and on altars around the world. His name was given by his first guru during a formal initiation ceremony into a yogic lineage in 2005. Since that time, he has studied with many spiritual teachers and traditional artists both in India and the States. Ekabhumi’s writing and artwork has been published widely, appearing in anthologies and journals like The Poetry of Yoga, Berkeley Fiction Review, and Pearl, as well as books like Tantra Illuminated by Christopher Hareesh Wallis and Awakening Shakti by Sally Kempton. His instructional Shakti Coloring Book and the uplifting Bhakti Coloring Book are now available world-wide from Sounds True Press. Though his first love is art, he has a wide range of interests that are reflected in his many past occupations: Yoga instructor, stock options broker, handyman, journalist, ski boot fitter, competitive surfer and champion sailor. He toured internationally as a performance poet, and the poets he coached won numerous regional and national titles. He hosted writer’s groups, produced poetry readings and organized spoken-word festivals for nearly 20 years, culminating in the wildly successful 2009 Individual World Poetry Slam. For nearly two decades, he variously taught yoga, painting, public speaking, and creative writing to students ranging from kindergarten to post-graduate level. Ekabhumi is an inspiring, playful yet methodical teacher who utilizes the arts to help students cultivate deeper intuitive states. He is currently core faculty of (contact info blocked) and visiting faculty for The Bridge in Shanghai. On weekends, he can be found in his garden practicing silence and learning directly from Nature. 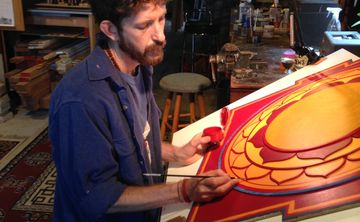