The Monks from the Drepung Gomang Monastic College

Drepung Monastery was founded in 1416 near Lhasa, the capital of Tibet. Gomang Dratsang or College is the oldest of the four colleges of Drepung. In 1959, before the invasion of Communist China, Drepung monastery had more than 10,000 monks. Since its beginning, Gomang College has produced many eminent Buddhist masters and has been a vital important Tibetan and Buddhist learning center.

The Buddhist monks are endorsed by his Holiness the Dalai Lama, and their teachings extend the possibility of global peace, non-violent conflict resolution, compassion and wisdom throughout the world. The monks demonstrate and express their peaceful ways through living art, ritual, dance and prayer. They offer rare, ancient, and culturally rich Tibetan art, customs and spiritual wisdom.

The monks are scholars and artisans, and their tour is supported 100 percent by a network of volunteers who invite them to share their gifts with the community. All donations support the monks’ ability to educate, feed, house, and care for about 2,000 monks living in a Tibetan Refugee camp of about 16,000 people in South India.

At this time, great confusion and suffering exist because humanity can not simply 'be'. Sakyong Mipham Rinpoche 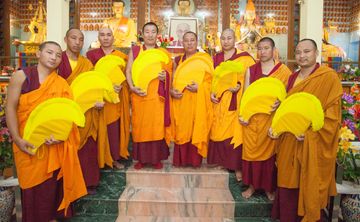 The Monks from the Drepung Gomang Monastic College