Welcome to Ligmincha International at Serenity Ridge! Ligmincha was founded in 1992 in order to preserve the ancient teachings, transmissions and practices of the Tibetan Bön Buddhist tradition. As the indigenous religion of Tibet and one of the world's most ancient unbroken spiritual traditions, the Bön  tradition has a rich and unique heritage. Toward achieving this goal, Ligmincha aims to introduce these traditions in an authentic manner to the Western world, in such a way that they remain beneficial when integrated into modern Western culture.

A 501(c)3 nonprofit organization, Ligmincha International is governed by a Board of Directors responsible for creating the organization's vision and goals. The Board, in turn, appoints Ligmincha Council members to help facilitate its vision and accomplish Ligmincha's mission. A small paid staff oversees the day-to-day operations of our year-round retreat center and informs the activities of Ligmincha's worldwide centers and sanghas.

Significance of the Ligmincha Seal

Ligmincha International is named for the Ligmincha dynasty of kings of the ancient country of Zhang Zhung, which is said to have been located in what is now northwestern Tibet. The inscription in Zhang Zhung language on the outermost circle of the Ligmincha seal is from the official seal of the last king of Zhang Zhung. It means “The king of existence who has power over the Three Worlds (Tib.: KhamTshan pa shang lig zhi ra rtsa). Just within that circle appear the five petals of a lotus flower, symbolizing the five sciences (rig-gnas-Inga) whose knowledge is necessary for an educated human to live fully in the world. Within that circle is an eight-pointed star signifying the first eight ways toward enlightenment among the causal and fruitional vehicles of the Nine Ways of Bön . At the center of the seal is the Tibetan letter A, which represents the Ninth Way, the Ultimate Path of Self-Liberation, known as dzogchen, the Great Perfection. 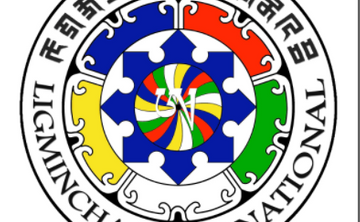